The name Bass & Flinders Cruises is synonymous with first class scenic cruises of Sydney Harbour and Botany Bay, as well as whale watching tours where passengers experience first hand the natural phenomenon of thousands of Humpback Whales migrating up and down the coast.

With over 20 years experience behind them the owners of Bass and Flinders Cruises have experienced it all when it comes to marine propulsion systems, so when it came time to specify the engines for the latest addition to their fleet – the 30 metre ‘Ocean Dreaming II’, they looked at the past in order to power for the future.

According to Bass & Flinders Richard Ford, ‘Ocean Dreaming II’ was originally conceived as a state-of-the-art whale watching vessel that would operate out of Darling Harbour and Circular Quay on Sydney Harbour.

“We engaged One2Three Naval Architects to create the ultimate whale watching platform that was to be ‘Ocean Dreaming II’, as we felt their unique ability to deliver designs that combined the elements of superior passenger comfort and efficient operation suited us best.

“And when it came to choosing the engines to power ‘Ocean Dreaming II’ we were pretty fortunate really as we’ve operated a range of diesels over the years that have included brands like Cat, Detroit, MTU and MWM, so we’ve had first hand experience with performance, reliability and back-up support.

“Our first charter boat was the 20 metre Bass & Flinders that was powered by 3208 Cats. She’s done over 20,000 hours and their performance has been exceptional and grief free and our regular maintenance programme means that re-builds aren’t on the horizon at this stage, as they are still going as strong as the day they entered service. “So when it came to selecting the diesels to power ‘Ocean Dreaming II’ we looked at our previous experiences and then weighed that up with what else was on the market that could deliver the power and support we needed. 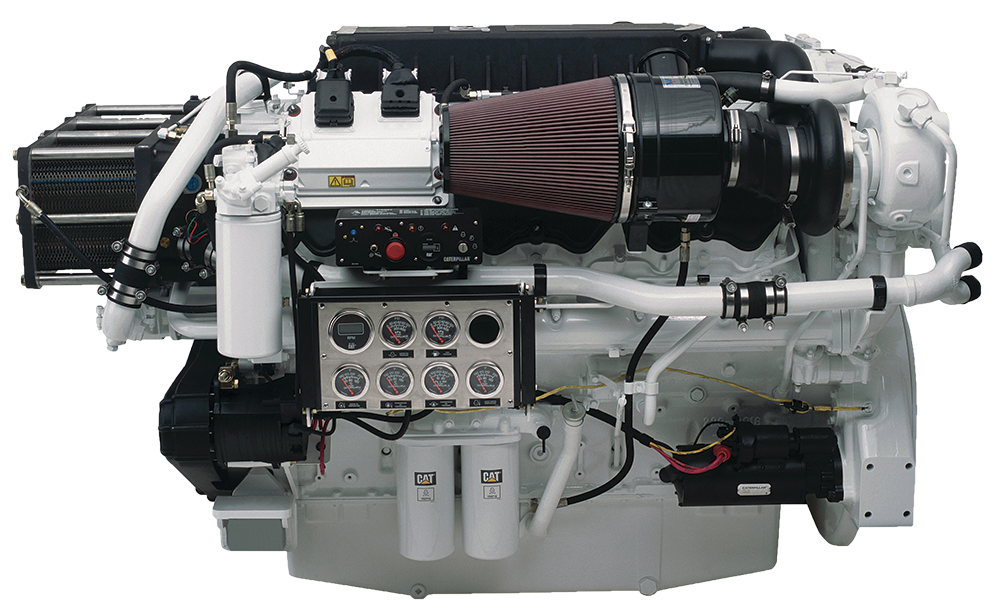 “In the end there really were only two serious contenders, so after consultation with One2Three and the builder, Aluminium Boats Australia, we settled on Cat’s 12 cylinder, 1,044 bkW, C32 diesels primarily due to our combined experiences – us with our original Bass & Flinders and One2Three and Aluminium Boats Australia’s previous four or five Caterpillar powered vessels, plus with the Cats we knew we’d always be able to access parts when needed at reasonable prices.

“Another attractive benefit of going with Cats was that they gave us the flexibility of maintaining a common parts inventory which reduces our costs and provides our crew with the advantages of commonality, as they know what to do and what to look for which is essential to maintain an efficient and reliable operation.

“By going with the C32 Cats we knew we would have more power than we needed, which as it turned out was a good thing as well into the build Bass & Flinders Cruises won the tender to operate the Circular Quay to Manly commuter ferry service, which resulted in substantial changes to the project to accommodate the additional operating specifications of a passenger ferry. “And this is where the Cats really came into their own as the new operating profile meant that ‘Ocean Dreaming II’ would be operating the Circular Quay to Manly commuter ferry shuttle service from 6am to 9.30am, followed by two whale watching tours from Darling Harbour and Circular Quay before re-entering service on the Circular Quay to Manly evening passenger service 7 days a week – which meant that preventative maintenance and regular servicing had to be done overnight.

“Thankfully Caterpillar’s distributor, Energy Power Systems Australia, had an extensive support network on Sydney Harbour and were able to work with us to ensure our services would not be interrupted.

“Six months into service and ‘Ocean Dreaming II’ hasn’t missed a service or been late and has delivered 100% availability, which is a real credit to the Cats as it’s a long day with varying operating profiles, so it’s not an easy life.

“To put the work load into perspective, the C32 Caterpillars had their 1,000
hour service after just 4 months in service during which time their
performance and reliability had been excellent.

“The Cats gave us more power than we needed, but that enabled us to have them governed to 750 kW which suits our commuter service profile of 27 knots and our whale watching service profile of 22 knots cruising and 7 knots trolling, which means they are only ever operating with minimal load.

“In our experience of running different types of diesels the Cats have definitely been the most reliable and cost effective to operate. And when it comes to support Energy Power Systems has been excellent – always there when we need them and fit in seamlessly with our overnight servicing requirements.

“Going with oversized engines has always worked for us and the Cats are a case in point as they enable us to run them at around 60% load as opposed to trying to squeeze every last bit of horsepower out of them which means we use far less fuel and should get exceptional life out of them with less through life running, maintenance and repair costs,” Richard said.

Changing the operating specifications from a purpose built whale watching configuration to a passenger commuter ferry configuration so far into the build posed some interesting challenges for the Brisbane based builder, Aluminium Boats Australia, but according to Stuart Pascoe their years of experience meant that no challenge was insurmountable.

“ The change in the operating specifications certainly created some challenges, but our priority is always to do the best for our customers, so we just knuckled down and got the job done.

“Probably the easiest part of the project was the selection of the engines as after studying the operating profile and what was available we agreed jointly that the best suited engines would be Caterpillar’s 1,044 bkW C32 diesels, as they’d give us the most bang for our buck when it came to the whole life cost.

“As a working engine they really are excellent, and when it comes to performance they’ve proved to be utterly dependable and reliable over the years we’ve been using them.

“And when it comes to an environment like Sydney Harbour they really have the runs on the board, which was another important factor for the client as the immediacy of service support and parts is essential for a multi ferry operation.

“The other attraction Cat engines have to a lot of operators is their extensive support network up and down the coast as many of them look to shift their boats every two to three years, so with Cats they’re an attractive proposition to potential purchasers.

“In terms of performance, the C32 Cats have been excellent achieving the contracted speed with ease, which from a builder’s perspective makes our life a lot easier.

“And when it comes to fuel economy Caterpillar’s ACERT engine management technology is a winner and when combined with our fuel efficient hull design ‘Ocean Dreaming II’ is using 10% less fuel than we originally predicted – which is a big bonus for the customer, especially when you consider how hard the engines are working.

“From our point of view Caterpillar engines are the only engines that we’d stand up and recommend as they’ve proved themselves to be extremely reliable time and time again in our boats and are backed by a support network that is second to none,” Stuart said.

In our experience of running different types of diesels the Cats have definitely been the most reliable and cost effective to operate. And when it comes to support Energy Power Systems has been excellent - always there when we need them and fit in seamlessly with our overnight servicing requirements.