With Caterpillar a preferred engine supplier, EPSA was approached by several leading pump OEMs who were bidding for the tender and asked for various scopes of supply ranging from engine supply only through to a total packaged solution designed, engineered and manufactured at EPSA’s facilities in Hallam, Victoria.

Quoting on the project commenced in August 2007, with EPSA receiving acceptance for an engine package and cooling system on a base frame in late December.

Destined for operation at Santos’ Moomba production and processing facility in central Australia, the multi-stage pump package is testament to EPSA’s design and engineering prowess – with the completed package attaining compliance with the stringent Australian Gas Standards that govern the local Oil and Gas Industries. 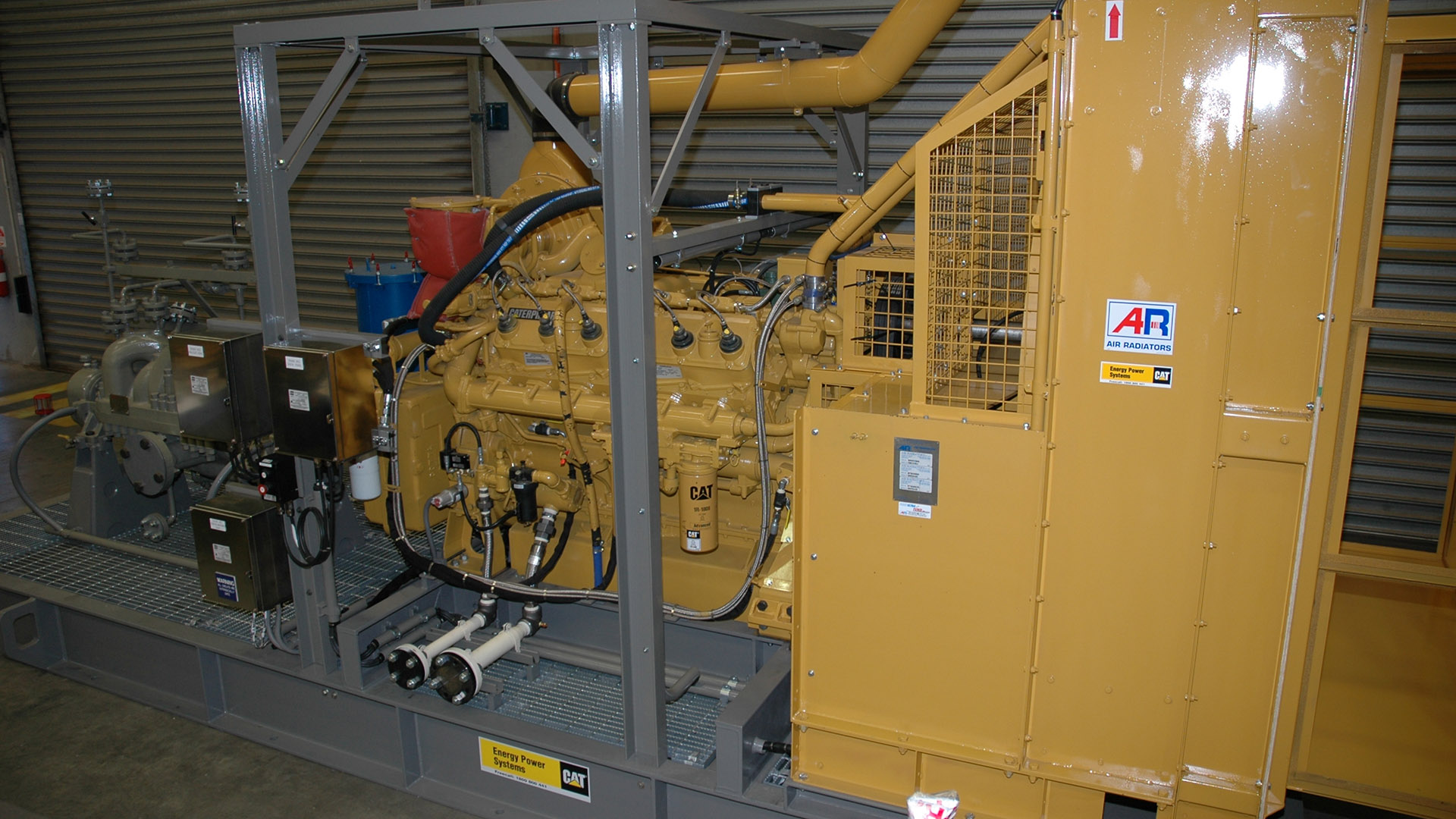 At the heart of the package was a field proven 27 litre, 600 hp, CAT G3412 gas engine that’s coupled to a multi-stage pump via a Cotta S13E speed increasing transmission that enables the pump to operate at twice the engine’s speed.

As the job progressed the scope of works was expanded to include the control and condition monitoring systems and the gas-skid that incorporated valving and processing equipment for the regulated supply of gas to the engine. These additional components significantly increased the complexity of the project and provided a myriad of challenges to be conquered by EPSA’s engineering team.

In the end EPSA designed, engineered, manufactured and assembled the entire package, which according to EPSA’s Dave Heard is a real feather in the cap for EPSA as traditionally complicated multi-stage pump packages like these are imported from specialist overseas packagers.

“The Moomba processing facility is a massive operation, accepting production from 115 gas fields and 28 oil fields that contain 536 producing gas wells and 177 producing oil wells through approximately 5,600 kilometres of pipelines and flow lines via 24 oil and gas satellite facilities, many of which incorporate field boost compression.

“Being awarded the contract for the entire pump package was a first for EPSA, as instead of just supplying an engine our engineers were able to supply an entire engineered solution for Santos, who currently use over fifty
Caterpillar engines for power generation, gas compression and pumping applications at their Cooper and Eromanga basin fields, in South Australia.

“The decision to manufacture in Australia was driven by a number of issues, cost being one, delivery being another, plus it gave Santos the opportunity to test the water with local suppliers.

“It was a highly disciplined design, engineering and manufacturing exercise that ensured the completed unit was intrinsically safe to enable operation in explosive environments with complete safety. The CAT G3412 gas engine was built to ensure its surface temperature doesn’t exceed 300°, while all the control wiring – which is encased in stainless steel conduit and featured special field connectors, had to be installed by an accredited technician in order to ensure non-spark performance.

“By having done so, ESPA’s engineers have gained further valuable and extensive insights into the intricacies of the stringent Australian Gas Standards which will provide a useful time and cost saving template for future projects.

“In all over 1,000 man-hours were involved in order to gain compliance, with every item stamped, tagged and
recorded in finite detail in a process that was continually monitored by consultants, assessors and expediters
who reviewed every aspect of the project with a fine toothcomb.

“At the conclusion of the project the mass of the paperwork generated appeared to equal the mass of the engine, but with all the research and development done EPSA’s engineering team now have a strong foundation on which to effectively manufacture more Oil Field Pump packages and hopefully retain this business within Australia,” Dave said.